The latest from HMJ land

Tintenbar Up Front, on the North Coast of NSW, began as a monthly session for musicians and other performers to share their art in a listening environment. It now also hosts music by local and touring artists.

“We began Tintenbar Up Front, a monthly evening of performance, in October 2012 for many reasons.  There is a lack of places to play that aren’t pubs or clubs with their noisy, busy environments. The commercialism of the music industry has reduced people getting together to perform and enjoy performances for the sheer love of it. TUF was born to try and create a fun, supportive environment for people to perform and audiences to enjoy those performances. We also think community is important, and it spirit needs nurturing in our modern fast culture. A group of people wanted to be involved in organisation from the start.

We regularly have audiences of 60-120, and each performer is given attentive respect. A wonderful Indian banquet is devoured by many of the guests. The meal time and a break for tea, coffee and cakes extraordinaire are a great opportunity for people to mingle and chat.

We often feature musicians whom we pay on our regular nights and at our December night we give over the second half to a local band, for dancing and more of a party feel.”

“We knew from the start that we would make money from these nights. We decided to donate all money to charities, minus expenses. We like to donate to a mixture of local and other charities. We decide as a group which charities to support each month. You can get examples from the charities page on the website, and the amount raised so far is over $28,500 in Jan 2017. We have also contributed a lot to improvements at the hall: signage, stage lighting, kitchen equipment, storage shed…”

“Now we have begun running concerts for touring and local artists and have had several from Canada, the U.S. the U.K. as well as Australia. These have been very successful. The artists take all the money from the door as well as cd sales. We do not donate to charity from these as we see them as a way of supporting wonderful musicians and deepening our community’s connection to music of all types from around the world.”

So what is involved?

“To get a good audience roll up involves connecting with people. This is done through the Tintenbar Up Front website and Facebook page. Our email list connects with over 580 people. On that email list are local newspapers and radio stations who add us to their gig guides and sometimes do feature articles. The local council and arts bodies also let people know of our activities. We have business cards and a large banner (put up outside the hall a week before) which are all cheap to print theses days. We also run a stage for performers at local festivals.

A group of six – nine  sets up and puts away the hall furniture each night (the audience helps with this too), also setting up the hall lighting and small PA, collecting money at the door, MCing and photography. Most of us make cakes and biscuits and tea and coffee which requires a gold coin donation towards our charity of the month. A local chef creates wonderful Indian food for people to enjoy, but sometimes a charity group will cook the food and the money goes to their cause.” 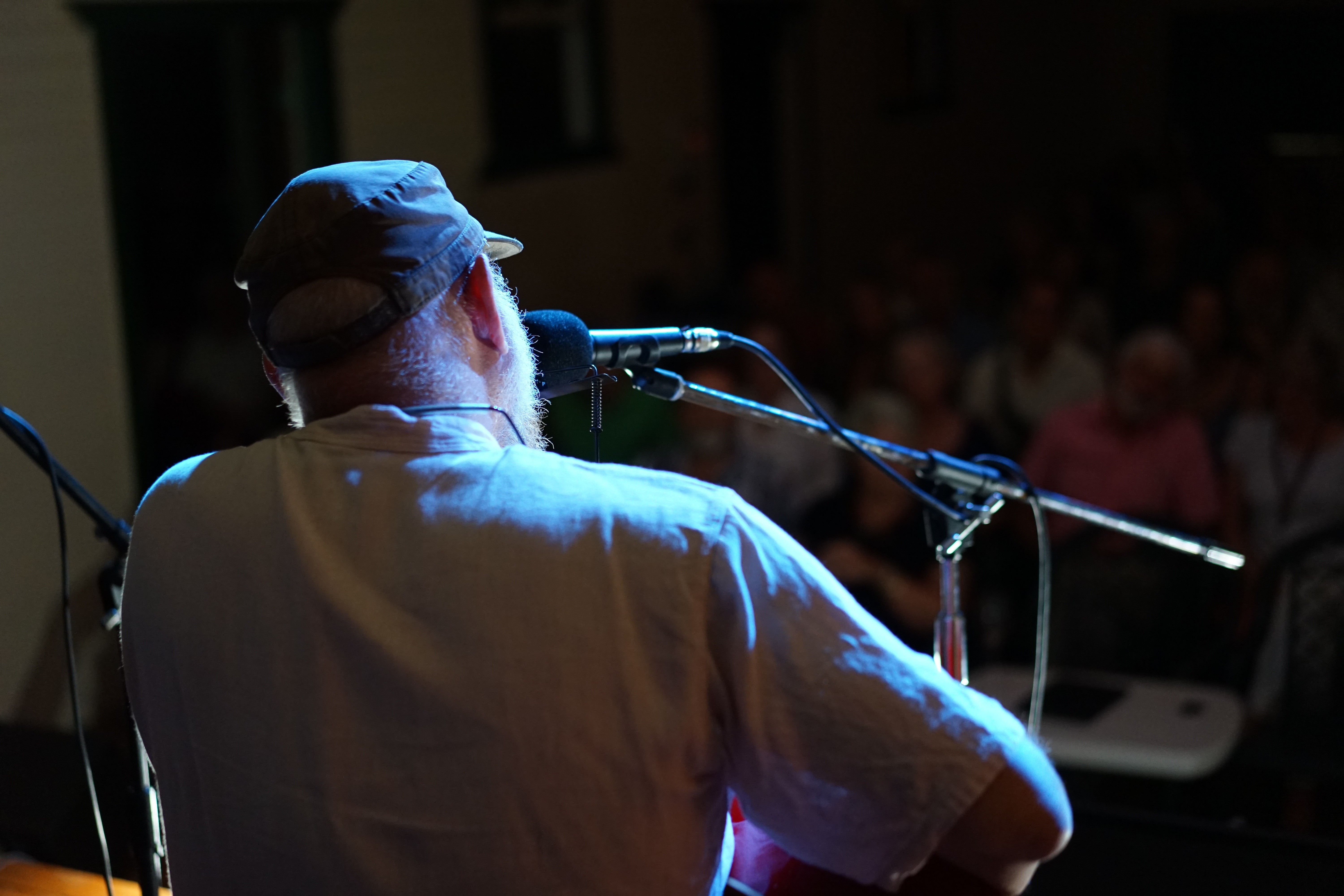 “We love that we have created a community event that people enjoy coming to and that performers love to perform at. The fact that we are also able to donate money to charity makes Tintenbar a win win win. The incredible variety and quality of performances is astounding.

Tintenbar Hall is a wonderful wooden, country hall over 100 years old. It has an ambience created not only by its structure but by its history. We run our events under the auspices of the hall committee so are covered by their insurance and at a nominal rent because they love having the hall used for so much benefit to the community. Some of them are in fact volunteers for TUF. Since these nights began, hall bookings for other purposes have nearly doubled.

Although there is work, it is never hard when it is so enjoyable and rewarding. Working as a team and talking to the appreciative audience members are very satisfying.”

“There have been many breathtaking moments and outstanding performances. People love the variety: young, old, guitar, violin, harp, harmonica, double bass, piano, tuba, recorders, ukes, kazoo, voice, choirs, originals, old favourites, poetry, comedy…. One highlight from a recent event was provided by Tony Koellner, a local performance poet of about 70 years of age. He had to follow a young hip hop duo and proceeded to get up and do his first poem in hip hop rhythm and movement. It was hilarious, engaging and thoroughly appreciated by the whole audience. You never know when magic will happen. The hip hop duo, Substance, themselves were amazing as a lot of their rap was freestyle on topics from the audience! At another, the last act was Black Train, and it was getting late. Their music had toes tapping. “Does anyone want to dance?” The audience spontaneously packed up the chairs and we danced for the next half hour! Local, Mavis Strong, who has come to Tintenbar Hall for over 80 years said of one at our performances. “I can’t believe I’m in Tintenbar Hall!”

“Drop us an email and we can arrange a chat. Or just go for it, it’s well worth it.”

Please login or register to leave a review!

Invite musicians to share the music they love creating in your home, hall or venue